Everyone talks funny, and seems obsessed over completely mundane details, like the “speed of glass” (what?!)

You might be left bewildered, wondering just when glass started to move on it’s own, and what’s the deal with chimps??

Do you want to start with photography the RIGHT way? CLICK HERE for our easy, quick (and fun!) online course.

We have compiled this handy guide to photography slang, both terms and acronyms, to help you navigate these often-confusing waters!

For a very comprehensive guide to standard photography terms, check out the Kodak Glossary of Photographic Terms or the Nikon Photography Glossary.

You’ll hear these in conversations between shooters.

Glass: Lenses. As in “Ooh, that’s some fancy new glass you got there!”, referring to a lens.

Fast/Slow: Used to describe the maximum aperture of a lens. A fast lens has a very low maximum aperture (like f/1.4), which allows you to let in more light, and use a faster shutter speed. A slow lens (like f/5.6) shooting the same scene would require a longer shutter speed to get the same exposure. In general, a faster lens is more desirable (and more expensive) than a slower lens. Often combined with “glass”, e.g. “I need to get some fast glass!”

Chimping: Looking at the LCD after taking a photo. The term comes from the suggestion that photographers make chimp-like noises (“Ooh ooh ooh!”) when admiring the great shot they just took.

Pixel Peeper/Peeping: Checking out the image quality of a camera or lens by opening up an image file on the computer, zooming waaaay in, and scrutinizing the quality down to the pixel. Often considered a derogatory term, and suggests that these photographers are not taking real world standards into account.

Magic/Golden Hour: The hour or so before sunset, and after sunrise, when the angle of the sun produces magical, golden light. A fantastic time to take photos outdoors. Read this article for more tips on shooting at this magic time.

Spray and Pray: Shooting a large amount of images without much care, and hoping that one will turn out.

Uncle Bob: A term used by wedding photographers to describe a relative with a camera who tends to get in the way of the hired photographer.

Bokeh: A Japanese term used to describe the quality of the out-of-focus areas in an image. If it’s particularly pleasing, you’ll hear “Sweet bokeh!” Pronunciation varies, usually either “boh-kay” or “boh-ke”. 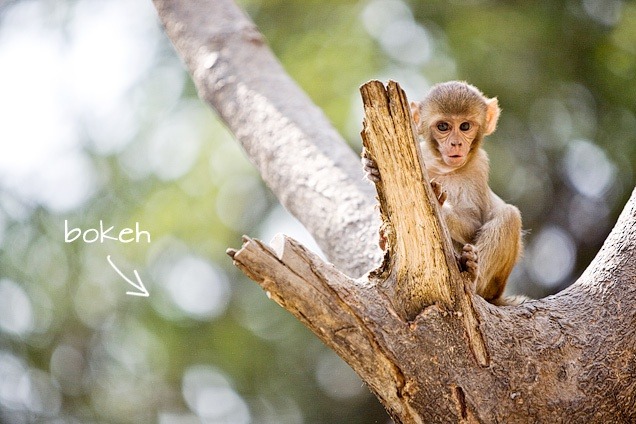 Prime Lens: A fixed focal length lens. The other option is a zoom lens, which can move between a range a focal lengths.

Blown Out: When bright areas in an image are so overexposed that they lose all detail, and become pure white.

Grip and Grin: A snapshot-type photo, where the subjects grip on to each other, look at the camera, and grin.

Sharp: Can describe a lens or an image. A lens can be considered sharp if it provides clear, crisp images. A photo can be sharp if it is perfectly in focus, and has clear detail.

Soft:  The opposite of sharp. A lens can be considered soft when it doesn’t provide sharp images. A photo could be soft if it was slightly out-of-focus.

Noisy: Describes the quality of an image in regards to the amount of digital noise—grainy artifacts in the photo. It might also be used to describe a camera, for instance “It’s really noisy at 3200 ISO”.

Raw: A file format that records all possible data from the camera sensor. Differs from a JPEG, in that with a JPEG some original image data is lost due to compression. Raw files have many different filename extensions, like .cr2 (Canon), .nef (Nikon) and .arw (Sony). Take a peek at this article to learn why you should be shooting in raw.

Frame: You may hear “fill the frame”, or “I took ten frames to get a good one”, or “In this frame the cat is sleeping”. This term is used pretty frequently! Filling the frame, or looking for distractions in the frame, refers to the image that you are taking. Framing an image generally means to choose your composition (rather than putting a wooden frame on a print). Taking frames means to take photos.

Flare: Also known as lens flare, this refers to the effect achieved when light is internally reflected in a lens. It results in colourful streaks, circles, and rays. While traditionally seen as an error, it has become more desirable as a way to add a little pizzaz to the photo. 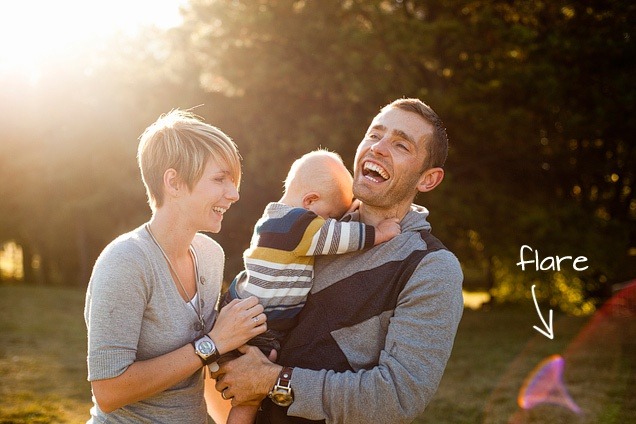 These are more commonly used online, rather than said verbally. These are some of the most common ones, but there’s an enormous list right here on Wikipedia if you run across others that you need to decode!

SLR: Single lens reflex. A type of camera that lets you view the image through the same lens that takes the photo.

DSLR: Digital single lens reflex. An SLR camera that has a digital sensor, rather than film.

P&S: Point-and-shoot camera. A small, consumer level camera that is easy to use, to the point of only needing to point and shoot. Lacks a lot of the advanced features of SLR cameras.

DOF: Depth of Field. The range of focus in your image. How much of your image is sharp in front of and behind the point you’re focused on.

AF: Auto-focus. The ability of a lens, or camera, to automatically focus on a subject.

OCF: Off-camera flash. The use of external flashes that aren’t mounted on top of the camera.

PP: Post-processing. Using software to edit an image on the computer.

SOOC: Straight out of camera. An image that hasn’t yet had any post processing done to it.

PS: Photoshop. A program made by Adobe to edit photos.

LR: Lightroom. An editing program made by Adobe. Check out this article for the differences between Photoshop and Lightroom.

FF: Full frame. A digital camera that has a sensor that is the same size as a 35mm piece of film. Smaller sensors are often referred to as “cropped”.

CMOS: Complimentary metal-oxide semiconductor. The technology used to create the majority of digital sensors for cameras.

CCD: Charged-coupled device. A technology used to create sensors for some digital cameras (like Leicas).

C&C/CC: Comments & Critiques. Can also mean Constructive Criticism. Used when asking for feedback on an image in a forum.

If you want to start with photography the RIGHT way – CLICK HERE for our easy, quick (and fun!) online course!

Do you know of any other photography slang terms or acronyms? Is there one that you just can’t figure out? Let us know in the comments below and we can add them to the list!