You are here: Home / Lightroom and Post Processing / Should You Convert Your Photos To DNG? 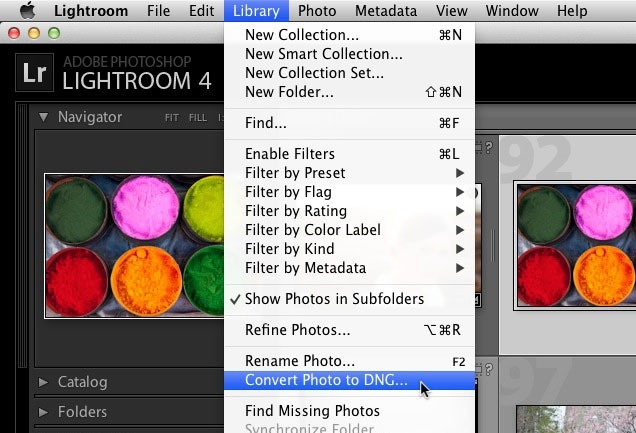 The world of digital photography changes FAST. It’s a fun and exciting time, with new gadgets coming out all the time. But as a digital shooter you need to think ahead to the future, and figure out how you can protect your images from the changing times!

If you’re not planning right, you might end up with an archive of images that you can’t even open. Uh oh. Read on to learn more about this subject, and how you can prevent that from happening to you!

Now, if you shoot in the RAW file format (and you should be – here’s why you should shoot in RAW) you may or may not have heard of the Digital Negative (DNG) format. The DNG is an open source RAW file format that was developed by Adobe and released in 2004. You might want to consider converting your RAW files to the DNG format as it offers some serious benefits!

The Benefits Of DNG

One of the problems in photography right now is that the vast majority of camera manufacturers have their own proprietary RAW formats. If you shoot Canon you might have noticed your RAW files end with .cr2, or with Nikon it’s .nef. These proprietary formats might be difficult to read in the distant future since the format hasn’t been openly documented and support from the manufacturer may not always be there. It’s hard to imagine not being able to open Canon or Nikon files today, but ten or twenty years from now who knows where those companies could be!

Since the DNG format (.dng) is open source anyone can write software to read or write the format. It’s not limited to Adobe software like Lightroom and Photoshop. Many different software developers support the DNG format (Apple Aperture for example).

XMPs are metadata files that can exist next to the original RAW file (.xmp). They basically contain instructions about how the file should be processed. For example, if you’re using a program like Lightroom to edit your images, changes to adjustments like exposure and temperature could be stored in the XMP file. Because the XMP data is a separate file it can be an organizational challenge keeping the original RAW file and the XMP file together. It’s just messier having two files! With the DNG format the XMP data is included in the DNG file, so you don’t have to worry about the XMP data getting separated from the original DNG. Makes it quite a bit simpler to keep things organized!

Where You Can Convert To DNG

Using Lightroom you can convert to DNG right on import. Or you can select “Convert Photos to DNG…” from the Library Menu in the Library Module (see the image above). I would suggest converting to DNG after import as the conversion process does take a bit of time and seriously slows down import!

You can also use a stand alone DNG conversion tool.

Should You Convert JPEGs To DNG?

It is possible to convert JPEGs to DNG but it might not be necessary. JPEG is already a standard image format that will be compatible far into the future. By converting to DNG you do gain most of the benefits listed above but you also increase the file size a bit.

One big advantage is that by converting JPEGs to DNG you gain the non-destructive characteristic of RAW and DNG files. That means you can’t accidentally make adjustments that change the original file (the way you can with JPEGs). In my opinion the biggest reason not to convert JPEGs to DNG is that the JPEG format is already compressed and missing a ton of the original image data. It makes a lot more sense to capture in RAW and convert to DNG than to capture in JPEG and convert to DNG.

We shoot in the RAW format (Canon .cr2, Sony .arw). For our portrait sessions we convert all the selects to DNG for archival purposes (just the selects, not all the images captured during the session since it does take a bit of time to do the conversion). Converting selects might be something you want to consider if you’re a wedding or portrait photographer. For personal work we convert everything to DNG usually on import (if we’re importing a lot of images we’ll save conversaion for later). I’ve also been slowly and steadily converting previously captured images in our archive.

Our adoption of a DNG workflow has happened only recently, in the last year and half (since we started shooting with the Sony NEX). Shooting more personal work has made me think about the future of our image archive and best practices to ensure we can easily access our images 50 years from now!

Side Note: We don’t include the original RAW files when we convert to DNG and I haven’t run into any issues because of it. The only reason I’ve read about to include the original RAW file is if you’re converting to an earlier version of the DNG format where compat
ibility might be an issue – though I haven’t seen any problems reported. So far working with DNGs has been just as easy as working with proprietary RAW files. There’s no real difference in how you edit the files or the quality of the photos.

Do you convert your images to DNG? If not what’s holding you back? Let us know in the comments!

Are you interested in learning how to edit your photos in Lightroom 4? Then check out our Super Photo Editing Skills tutorial below.