You are here: Home / Cameras / Sony A7 Review: Initial Impressions on a Game-Changing Camera 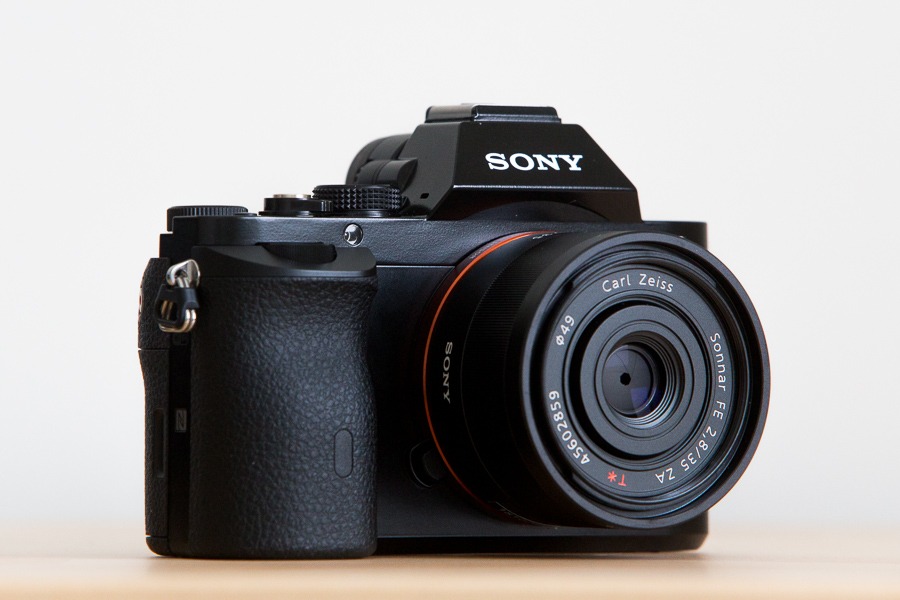 A couple years ago Sony released a camera that turned heads and challenged the current cameras on the market. That camera was the Sony NEX, a mirrorless point-and-shoot-sized camera with a large APS-C sized sensor. We were super excited about the NEX because it was basically a DSLR-sized sensor in an incredibly portable camera. Fast forward to today and the tirelessly innovative people at Sony just recently released the A7 and A7R (basically the latest version of the NEX camera, but no longer called the NEX).

These are groundbreaking cameras that you’ll certainly be hearing more about (if you haven’t already read about them on every other photography blog!).

We recently picked up the A7, and have been putting it through its paces. We were curious to see if this was the camera we’ve been waiting for. This post will be the beginning of an informal multi-part review.

What’s so special about these cameras?

First off, the biggest distinguishing feature of these cameras is that they both have a full frame sensor. That might not seem like a big deal at first (there are plenty of full frame cameras out there). The thing is that the only other full frame mirrorless camera on the market besides the Sony A7/A7R is the Leica M (about 3x more expensive compared to the Sony!). And compared to small full frame DSLR cameras (like the Canon 6D or Nikon D600) – the mirrorless Sony A7/A7R is about half the size! This makes the A7 and A7R cameras pretty special!

Full Frame DSLR Canon 5D Mk II on the left and the full frame Sony A7 on the right.

Sideview: Canon 5D Mk II on the left and Sony A7 on the right.

Another cool thing about this camera is that it features a built in hi-resolution electronic viewfinder. This is a pretty important feature to have since it allows you to compose your images in bright sunlight (instead of needing to use the screen on the back of the camera, which is very difficult under harsh light).

Finally, Sony launched the cameras with the announcement of three Zeiss compatible lenses, which means high quality lenses are already available (with more to come!). Sony also announced a couple compatible lenses of their own.

Of course these cameras have a ton of other awesome features like a tilt-able screen, 1080p video, various creative modes, wi-fi etc but the important features are the camera’s size, full frame sensor, and electronic viewfinder.

The cameras look identical but there are some slight differences. First, the A7 has a better type of autofocus known as phase detection. It might not have been possible to add phase detection autofocus to the A7R’s larger sensor. The A7R has no low-pass optical filter (which means is that you should be able to achieve sharper images).

I think the price point and feature set for both of these cameras provides really good value. Since we only have the A7 I wonder how much slower the autofocus would be with the A7R (if any reader can comment let me know!). I certainly like the idea of the A7R’s 36mp sensor (especially if it produces the same quality as the A7), and if the autofocus isn’t that much slower then paying the $600 difference between the two cameras could be worth it.

The first thing I noticed was the weight and size. After using it for a couple weeks now, I still pick it up and I’m blown away with how compact the camera is. To have a full frame, interchangeable lens camera, with an electronic viewfinder at this size and weight is really incredible.

The next thing I looked for was build quality. The A7 feels solid and the built in grips makes it easy to hold. It didn’t feel like I was going to drop it, and it’s easy to shoot the camera with one hand. One thing that did stand out was the screen. We scratched up our old NEX-3 pretty badly. The screen on the A7 seems to be made out of the same soft plastic material. I put a screen protector on right away but unfortunately it makes the screen look terrible. I’ll hopefully be able to replace it with a better quality screen protector from Sony once they release theirs. 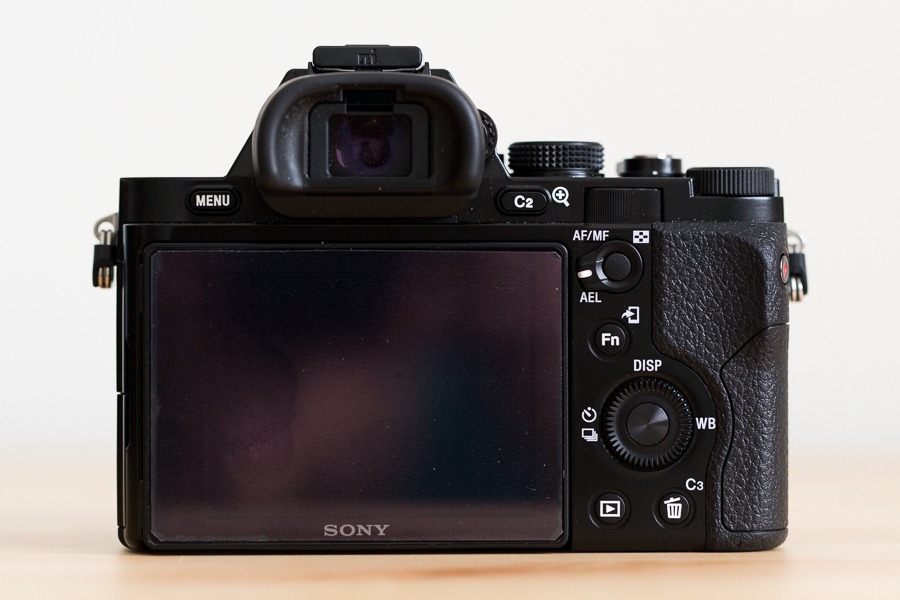 Back view of the A7. Note that the screen has a pretty ugly LCD screen protector applied.

Two other things I noticed during the unboxing. First the A7 doesn’t ship with a batter charger! It only includes a cord that you connect your camera to. I don’t know how much Sony saved by making this choice, but it seems pretty short sighted. I find it pretty inconvenient messing around with cords. Luckily we are able to use the battery charger that came with our old NEX, since they use the same battery. I would recommending picking up a battery charger if you don’t already have one.

One accessory that was included in the A7 box was a neck strap. I usually don’t even bother taking the neckstraps out of camera boxes because they’re typically super cheap (uncomfortable) and plastered with camera make and model logos. However, the camera strap included with the A7 is fantastic (excellent quality). It’s super super thin, and has a rubberized coating on one side. It also has minimal logos. We don’t use a neck strap all the time, but when we do it works perfectly. 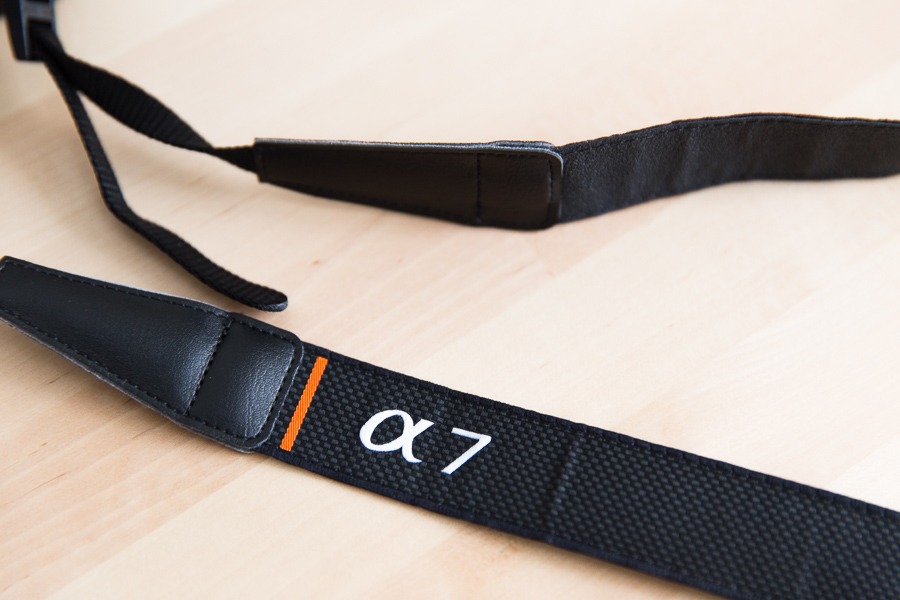 First of all there are a lot of buttons, dials, and switches packed on to this camera and so it is a bit overwhelming at first. There are three control wheels so you can quickly adjust shutter speed, aperture and ISO. One thing I found is that because of the camera’s small size it felt a bit awkward trying to quickly make adjustments to all the different control wheels (especially the front control wheel). This might be something that just takes a bit of practice if you’re coming from a larger DSLR camera. 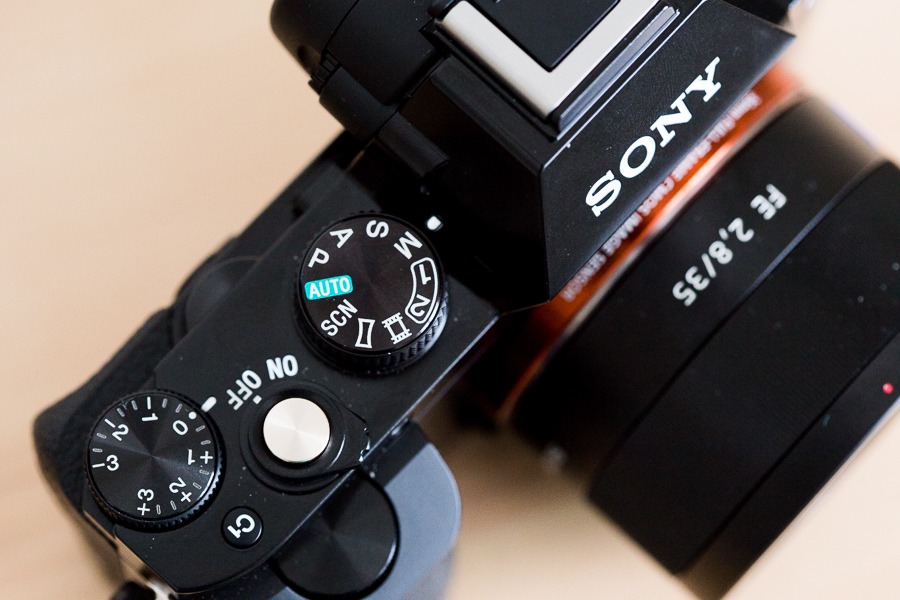 Top view of the Sony A7

Looking through the viewfinder is really great experience. First off, the refresh rate is excellent. On earlier models like the NEX6 and NEX7 the viewfinder seemed to flicker quite a bit — which is not the case with the A7. Another cool thing about using an electronic viewfinder is the ability to get a live preview of what the exposure of your photo will be like. This basically eliminates chimping! You can also adjust the brightness and white balance of the viewfinder so that what you see is what you get. The viewfinder has been really comfortable to use and super useful when shooting outdoor (when the LCD screen on the back would typically be washed out). One neat thing you can do with the viewfinder is review photos you’ve taken while looking through it – it kind of feels like using a Viewmaster!

Shooting with the camera’s LCD was also easy. However, it would have been nice to have the ability to shut the screen off (and only use the viewfinder).

There were a couple things I noticed that I didn’t like. First, the menu system feels kind of cluttered. It’s not like the navigation of the menu is complicated, but just doesn’t feel intuitive and I keep forgetting where everything is. Also setting up Wi-Fi wasn’t the easiest, and sharing photos over Wi-fi isn’t as convenient as it should be. I really feel like its about time these cameras worked seamlessly with our smart phones. Hopefully some of these things can be improved with firmware updates.

In the next blog posts I’ll share more example photos, talk about the camera’s auto focus, show you the Wi-fi sharing in action, and chat a bit more about how we customized our A7 before giving a my final thoughts. Hopefully by breaking the review up this way it easier to follow along (and easier for me to write!).

To learn more about the camera right now, and for a more technical perspective, head over to DPreview.com’s review of the cameras.

Have you shot with the Sony A7/A7R yet? What do you think?