You are here: Home / Learning Photography / What Does Aperture Mean in the World of Photography? 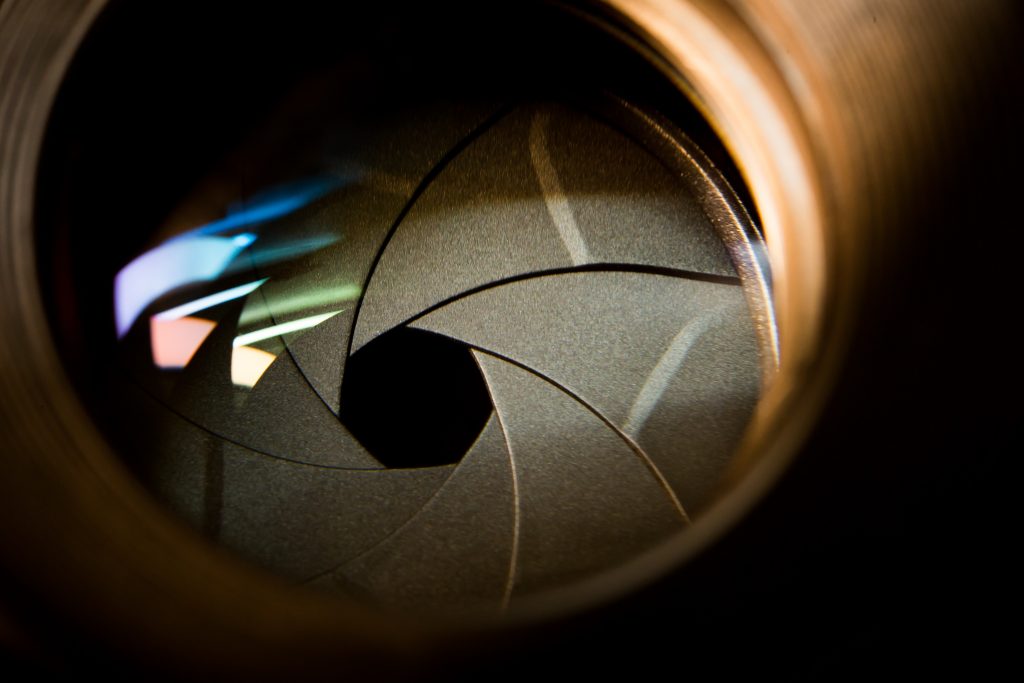 In photography terms, aperture is what you call the opening in your lens by which light is allowed into your camera. You can think of the aperture of your lens like the pupil in your eyeball. When you’re in a dark environment, your pupils expand to allow more light into your eyes so that you can see better. When you’re in an extremely bright environment, your pupils become pinpoints to let in less light.

The aperture of a camera lens works the exact same way. What does aperture mean? It means the literal aperture (fancy word for opening) of your lens. You can expand or shrink the aperture of your lens to allow more or less light directly into your camera.

How Does the Aperture Work in a Camera Lens?

The opening in your camera by which light enters the sensor is controlled by 9 individual blades, creating a diaphragm. This diaphragm is basically like the eyelid of your camera. The more that the diaphragm tightens, the narrower the opening gets and the less light that goes into your camera. When the blades open up to their widest point, the maximum amount of light is then allowed in.

How Does Aperture Affect Depth of Field?

If a picture has a large depth of field, it means the background and your subject are both going to be sharp.

The aperture can affect the depth of field depending on how large or small it is. To create a shallow effect, you’re going to use a large aperture because it can better separate the subject from the background. This is the only way to make a pleasant background blur in things like portraits.

On the other side, a small aperture produces just a tiny amount of background blur. For those of you who are interested in landscape photography or taking pictures of buildings, you probably want to use a smaller aperture. This will ensure the entire scene is clear.

How Does Aperture Affect Exposure?

One of the most profound ways that aperture can affect your photographs is by changing the exposure. Exposure is a fancy way of saying how bright your picture is. Because when the aperture changes, the amount of light reaching your camera sensor also changes, the brightness of your pictures can change with the aperture.

There is a trick to getting the best aperture for proper exposure. When the aperture is wide open, sunlight will result in an extra bright photograph. This is obviously not desirable in extreme daylight. If it’s a sunny day and you’re shooting with a large aperture, your pictures will be too exposed. The over-exposure will make your pictures look bleached, foggy, and altogether horrible.

The same can be said for using a small aperture in a dark environment. It will make your pictures too dark, or underexposed.

The trick is to understand what kind of light you’re shooting in, set the aperture accordingly, and take some test shots to make sure the exposure is perfect. As you can probably guess, dark environments are the best time to use a large aperture while you need to use a smaller aperture during the day.

How To Choose the Correct Aperture

How do you choose the correct aperture? To understand this a little better and give you an idea of how to properly set your camera for any occasion, we need to look at how apertures are measured.

What is the F-stop number? The F-stop number tells you the exact size of the aperture you’re using. On a typical camera, F-stop numbers go from f/2.8 to f/16. But don’t let the numbers fool you. f/2.8 is larger than f/16.

The reason the numbers seem so confusing is that F-stop measurements are in fractions. So, f/16 really means 1/16”, which is obviously smaller than f/4, which would be ¼”

The number of the F-stop can be found on your viewfinder, usually in the top right corner of the screen. There will be a great big F and a number beside it indicating your current aperture.

And now that you know how to find what aperture you’re using, here are a few simple things to remember for getting the settings correct in your camera before shooting.

First of all, a dark environment requires a larger aperture. We recommend starting with the largest aperture in an extremely dark place, meaning f/2.8. If your pictures prove to be too dark, try changing your shutter speed to compensate.

If you want to capture an amazing shallow focused portrait, be sure to have the aperture quite large, again at f/2.8. For pictures of landscapes or macro photography, decrease the aperture to something small like f/8, f/11, or f/16.

What Does Aperture Do at Different F-Stops?

Different F-stops are better for different occasions. While most cameras are limited to an F-stop range of f/2.8 to f/16, some professional cameras go all the way from f/0.95 to f/22. Here’s a small list of what you can do with the different apertures.

F/0.95 – F/2.0: These extremely large apertures only come with the best prime lenses. You won’t get this kind of aperture flexibility with a standard digital camera, you absolutely must buy a high-quality prime lens.

When using this large of an aperture, you’re going to be letting in a massive amount of light into your camera sensor. Any F-stop between f/0.95 and f/2.0 should be reserved for indoor photography where there is not a lot of light. Things like wedding receptions, taking photos of basements, or even trying to photograph the sky at night.

Remember that your depth of field is going to be extremely shallow at close distances, separating your subject from the background. You won’t be able to take expansive pictures at this large of an aperture.

F/2.8 – F/4: This is a typical large aperture range for most cameras and lenses. It’s still considered a wide aperture and is best for gathering huge quantities of light. The sharpness at this aperture is going to be perfect for things like travel photography, wildlife photography, and everyday picture taking. Most of the time, unless it’s extremely bright outside, you’ll be shooting with an aperture between f/2.8 and f/4.

F/5.6 – F/8: If you’re into landscape photography, you’ll be shooting with an aperture of between f/5.6 and f/8. It gives just enough depth of field to capture larger areas in perfect clarity. Large groups of people, team photographs, architecture, and other things where you’re not taking pictures from too far away can be captured best between these F-stops.

F/11 – F/16: For most cameras, this is the narrowest and smallest aperture available. It’s used for landscape photography and macro photography. It’s also used for anything when you need a maximum depth of field. The only issue is that once you pass f/8, you begin to lose sharpness. Sharpness isn’t that important when taking pictures of landscapes, but if you’re trying to shoot people too, it can be a problem.

F22: Shooting at anything over f/22 is going to result in a massive drop in sharpness. You will probably never encounter such an aperture in all your photography sessions. This is an F-stop only used to create an extra-wide depth of field with all parts of the picture in complete focus. The only problem is that with the aperture so narrow, even if all the parts of the picture are in focus, they’re probably too fuzzy.

Beyond light and dark, aperture is responsible for the depth of field, the overall sharpness of your pictures, the quality of the blurred background effect during portraits, and much more.

The good news is that aperture is easy to remember. Even just knowing the basic rules of how aperture works will allow you to take better and clearer photographs.