You are here: Home / Software / Why Apple’s Live Photos Will Revolutionize Photography

Note: The above image is a low quality gif, head to Apple’s website here to see a better idea of what Live Photos are.

On September 9th Apple announced the iPhone 6S. It includes a better camera, which is exciting. But what is really game changing is a brand new feature known as Live Photos. Ever seen a Harry Potter movie? Think of the photos in the films, and how they magically came to life. That’s what Live Photos are. Yep, that magic is now real life.

What this means is that every photo you take is actually a 3 second long movie! You still get the 12mp photo from the moment you pressed the shutter release, but you also get video of the moments before and after the photo was taken.

Take a second and let that sink in. No longer will you need to choose between taking a photo or a video. With Live Photos every photo you take will also include a bit of video.

Think about how this will change photography….

(Seriously, I encourage you to take some time to actually daydream about this, and what the world of photography might look like 5 years from now! That’s what I’ve been doing this week!)

(Aside: I’m already envisioning the day when future photographers try to differentiate themselves by offering “still-only photography” and wax poetic about the simplicity it offers.) 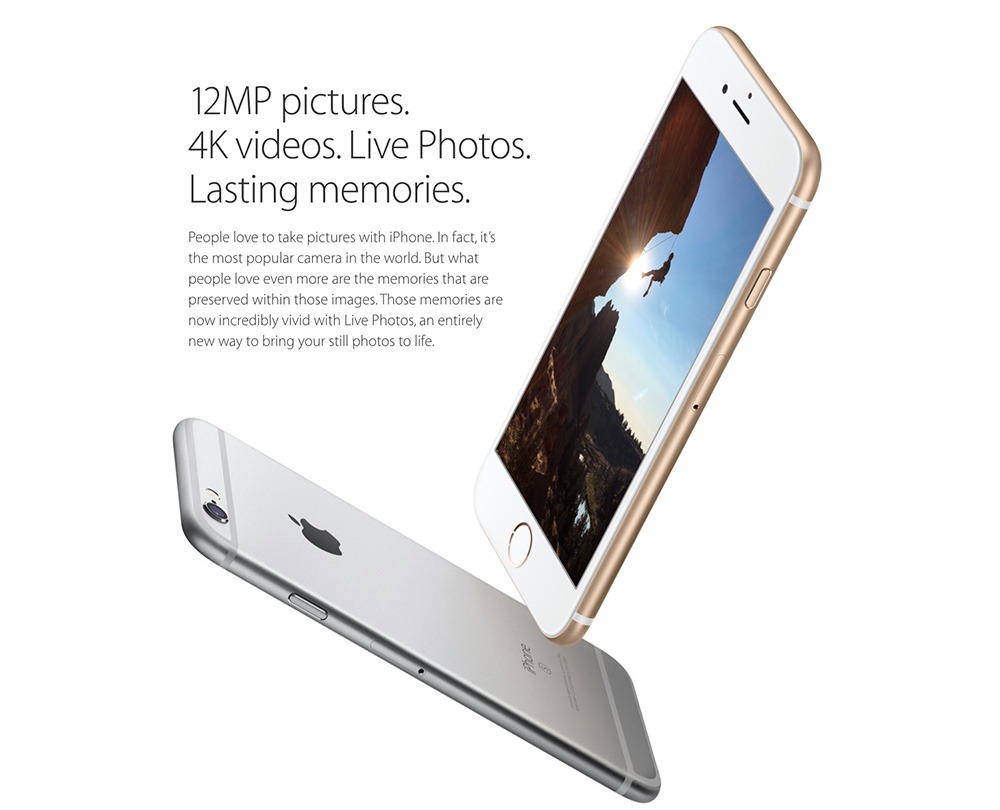 In order for Live Photos to capture 1.5 seconds of video footage before you take the photo the camera needs to be recording video all the time. So whenever you’re in the camera app it’s always recording video/audio. It’s important to note that nothing gets saved until you press the shutter release. The Live Photos feature will be enabled by default, but the feature can be turned off.

A Live Photo can be viewed on any Apple device (iPhone, iMac, iPad, Apple Watch). When viewing a Live Photo on the new iPhone 6S you’ll use the new 3D touch feature to press harder on your screen to activate the video.

Apparently Facebook already has plans to make their iOS app compatible for viewing Live Photos. And since Facebook owns Instagram, I’m sure it won’t be long until Live Photos show up there too.

But what about viewing Live Photos on non-iOS devices? My guess is that after an indeterminate adoption period, we’ll eventually be able to view Live Photos on non-compatible devices (how hard will it be to make photos on websites “click to play” or eventually simply auto-play like a GIF?)

Live Photos take up more space than a regular photo. This makes sense since it also needs to store the video and audio component. Considering that the new iPhone 6S is also capable of shooting 4K video, this means that you’ll probably want to avoid the base 16GB version of the phone – since your storage space will run out quickly!

Right now it seems like the file format for Live Photos is proprietary. There is the regular JPEG component of the photo which can be shared/used like usual but I don’t think the video and audio components are something you can take outside of iOS.

What this means is that at the moment you won’t be editing Live Photos in Lightroom.

Details are still sketchy but I’m guessing that the video component (1.5 seconds before the photo and 1.5 seconds after) probably won’t be high quality. Maybe 1080P. I highly doubt that the camera is recording 1.5 seconds of full resolution photos. (At 30 frames per second that would work out to 90 frames which would take up a wild amount of space if they were all 12 megapixels.)

What this means is that only the photo component (not the video component) will likely be great for printing and viewing really large. You probably won’t have access to breaking the Live Photo apart and choosing to edit or share specific frames (at least not at first).

I’m excited to see how the quality of these Live Photos hold up when viewed on a Mac (not an iOS device).

More Thoughts On How Live Photos Will Change Photography

First, nothing will change

Because the Live Photos feature is on by default there isn’t anything that you need to do differently when taking a photo. You’ll just take a photo the same way you always do.

But once these Live Photos start showing up everywhere, I think people are really going to get excited about the expanded possibilities they offer (look at how GIFs have become so popular in the past few years. People are craving motion!).

Photographers will start to think more like videographers – they’ll look for movement to record. And you won’t just think about one instant, but rather will be looking for a longer moment to capture.

How will big camera manufacturers respond to Live Photos?

How will Live Photos Improve?

This is the beginning of Live Photos, but there’s so much potential in store. I can think of a few ways this technology will incrementally progress.

There’s also a ton of improvement possible based on giving users more control. First you’ll probably be able to choose how much of the video gets added before and after the photo. I feel like 1.5 seconds is a bit short – what if it was 3-5 seconds? How might that change things? There would be less chance of you missing a moment.

The quality of the video will likely improve. Still frame grabs from 4K video work out to be about 8MP photos. Eventually Live Photos might just be the full resolution photos (not smaller resolution video). You’ll probably be able to choose the quality of video that gets recorded in order to keep file sizes small (or large if you need it).

You’ll probably also have better access to the individual video frames for the photograph. So you’ll be able to choose the perfect frame: no blinks, the best smiles, the best moment.

There might even be some smart software or algorithm that helps you find the best frame within a Live Photo.

Eventually more advanced algorithms will probably be able to automatically edit Live Photos together to create highlight reels. Google Photos kind of does this already with photo stories and GIFs.

How will Live Photos change the way people act/behave in photos?

At first people are going to act the way they do in regular photos. And it’s going to result in some initial awkwardness. Imagine a group shot where a photographer commands “Say cheese”, and then takes a Live Photo.

First of all these prompted photos are never really great to begin with, as the subjects are trying to force the expression onto their faces. A Live Photo version of this moment would be even more terrible, adding in time before and after the photo, where people are moving into and out of those forced expressions. It makes me think of this Ratatat music video made of up stock video clips which is hilarious but also awful.

But I think eventually, as we get used to life with Live Photos, people will change the way they behave in photos. And my suspicion is that it will be a move toward greater authenticity. There will be less of a concern about a specific instant in time being frozen. I see photographers taking on an even larger role in eliciting a genuine reaction from subjects.

(I have to chuckle as I imagine some fashion photos as Live Photos. So many types of photography will totally change as photographers work to adapt!)

Where will Live Photos be?

At the time of writing this post the Apple iPhone 6S has not been released to the public yet. (So please forgive any inaccuracies of the technical details of I’ve outlined!). I’ve speculated quite a bit in this post, both about functionality of Live Photos and the impact they will have. Who knows what will happen?! There are only a few days left before the phones are released, and then Live Photos will be out and the world, and we’ll get to see!

My guess is that they will transform the landscape of photography. I’ve already ordered the phone, and you can be sure I’ll be really diving into Live Photos and seeing how they change my own approach to my images. And, of course, I’ll be sharing more on the blog as we test things out!

What do you think? Will Live Photos change photography? Or do you think it’s just another camera feature? Let me know in the comments below!