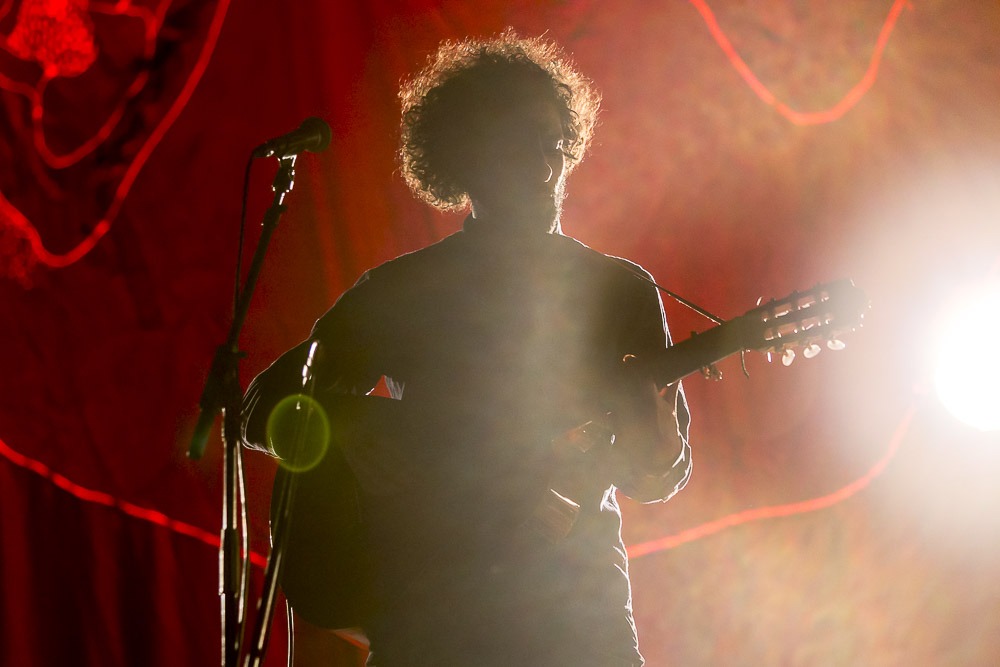 Recently I had the opportunity to photograph a live music show by José González. We were lucky enough to be contacted about the show by his label and when I asked for a press pass they set me up! Here’s a look at some of the shots I got, and a few things I learned along the way!

First off, José’s music is incredible and if you haven’t listened to him before I highly recommend checking him out.

Here are a couple songs to get you started:

This is from Junip, another band José plays in.

Since this was my first show with a press pass I wasn’t totally sure what to expect. The record label contact had mentioned that only the first three songs could be photographed from the pit, and that no flash photography was allowed. 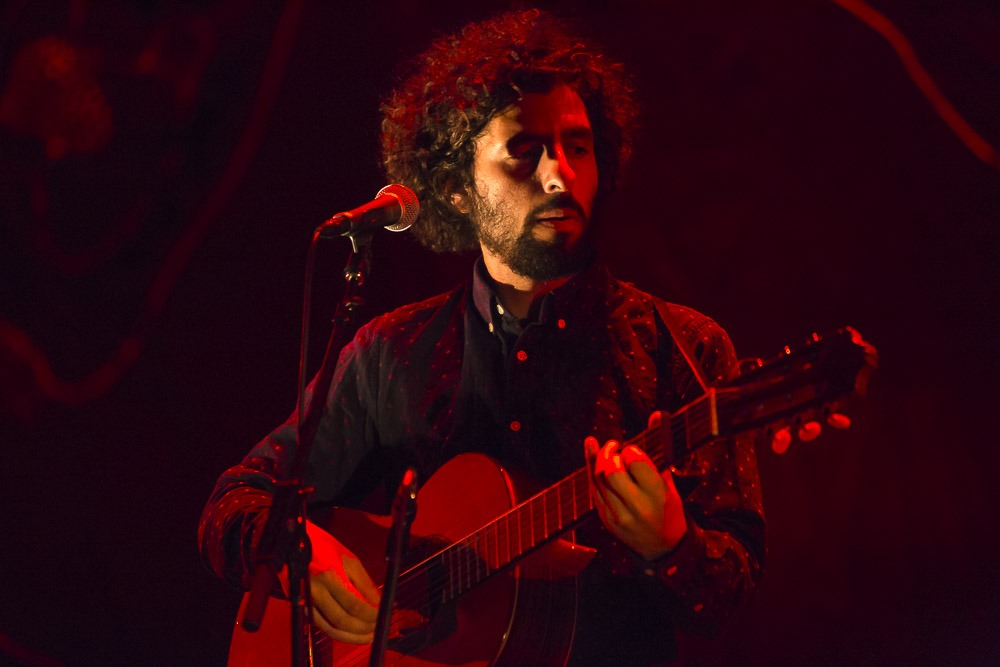 I did a bit of quick research about shooting live shows and it seemed like using fast primes was a must because of how low the light could be. At the same time I didn’t really know what position I would be shooting from so I knew zooms would be useful too. 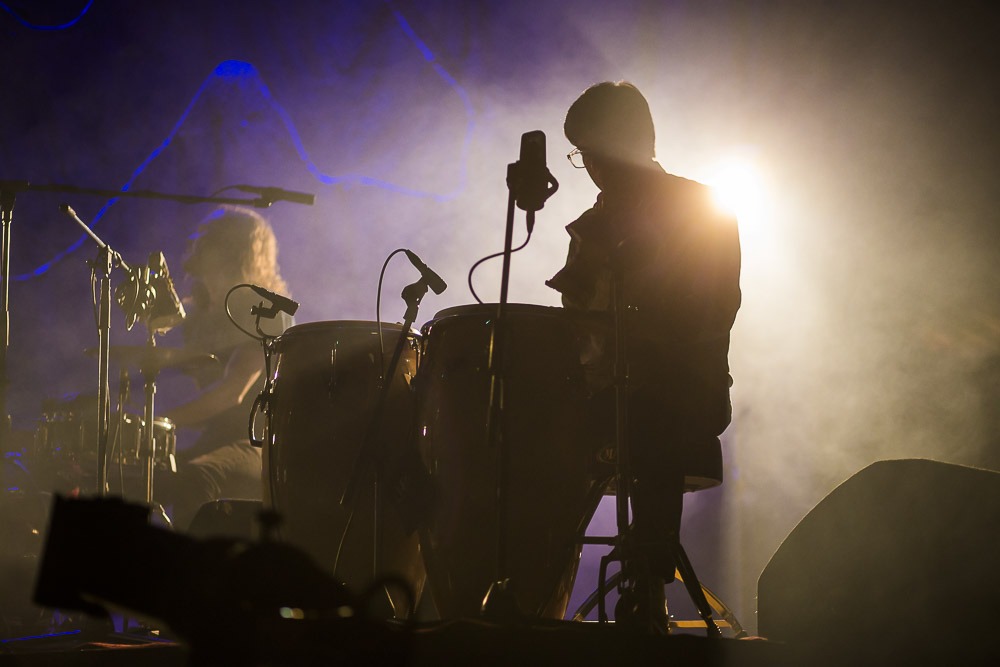 It was a lot darker than I expected! Most of the shots here were taken at ISO 5000. The lights also changed quite a bit (from side lit to extremely backlit) which made it a bit tricky to keep up with adjusting my settings.

From my research I had learned that since photography is limited to the first three songs, you really needed to get in a lot of shots since keeper rates are low. The low keeper rate makes sense now because of the lighting, and also because your subjects’ facial expressions are changing so much!

One challenge was that “the pit” for this venue was actually just the end of the aisle near the stage. I couldn’t move around much without getting directly in front of the front row audience sitting in their seats. I thought about moving to the other aisle (there were two aisles) but given the short amount of time shooting I decided to stay in one position. Looking at the shots now, I wish I had gotten more variety by moving around. I did manage to take a couple shots throughout the rest of the show from my seat (which was near the front).

In terms of lenses, I shot mainly with the 70-200mm. I liked that I was able to get in relatively close with that lens. I would have liked to have gotten a bit closer, and I think shooting the 70-200mm on a crop sensor camera would have been ideal. The 24-70mm worked well for the wider shots. I took a few shots with the 85, but I found it pretty difficult to use since I couldn’t move around much to get a good composition. Here’s one of the shots taken with the 85mm: 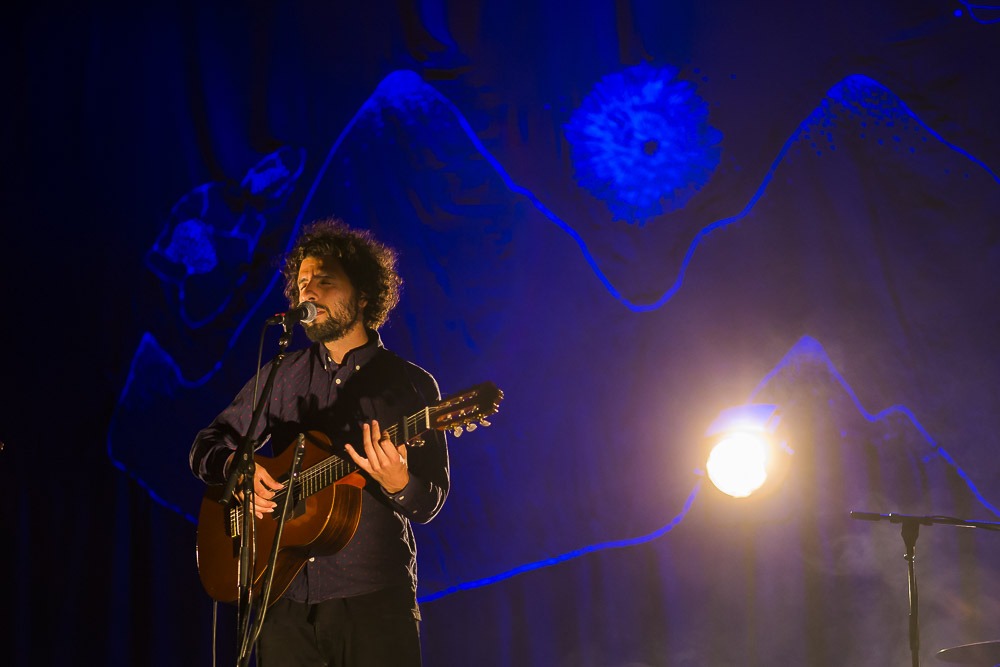 I had mentioned the low keeper rate. I took 333 photos during the show, and the 9 in this post are what I feel are the best ones. If I had moved around more I’m sure I would have gotten more keepers (it’s hard to get a lot of variety from one single vantage point). I think if I were shooting this for an assignment I probably would have taken a whole lot more photos (using multiple cameras and moving around). 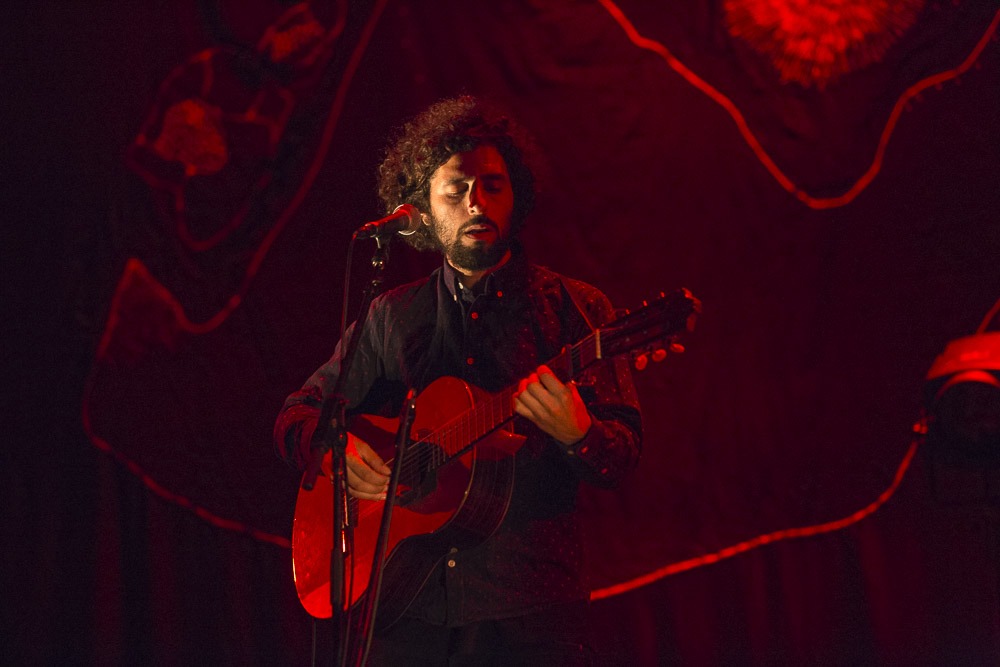 I used Lightroom 6 to process all the photos.

A moderate amount of noise reduction and sharpening was applied to all the photos (all global adjustments, no local adjustments). While the images were a bit noisy at 100%, I wouldn’t hesitate to shoot at ISO 5000 again. I think when viewing the whole image (especially at web size) they look pretty crisp and you’d have a hard time believing they were shot at such a high ISO.

Other than noise reduction, I mainly just did adjustments under the basic panel to dial in exposure and contrast. The Blacks slider and Shadows slider were useful in bringing back detail to the darker parts of the image. I also found the Whites slider quite useful at getting the contrast balance just right (the actual Contrast slider was not very useful given the extreme darks tones and highlight tones in most of the images).

A Few More Shots From The Show 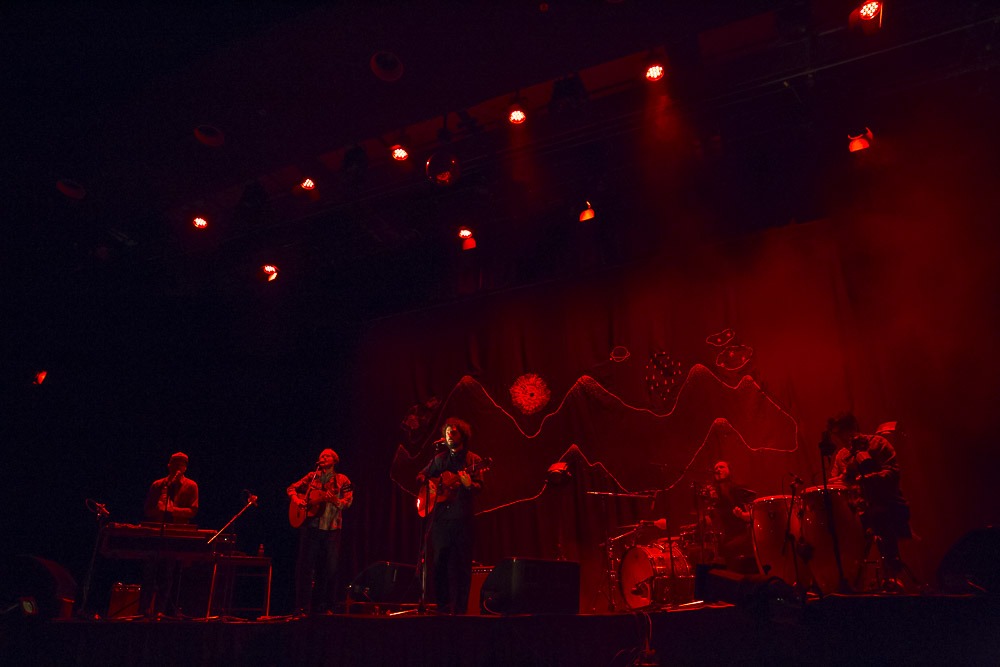 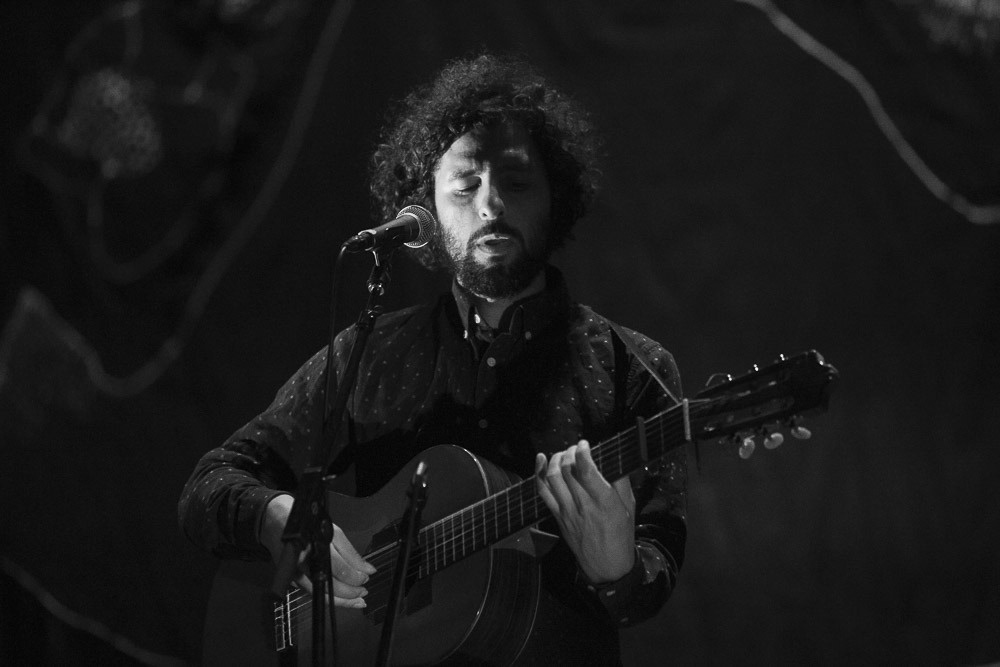 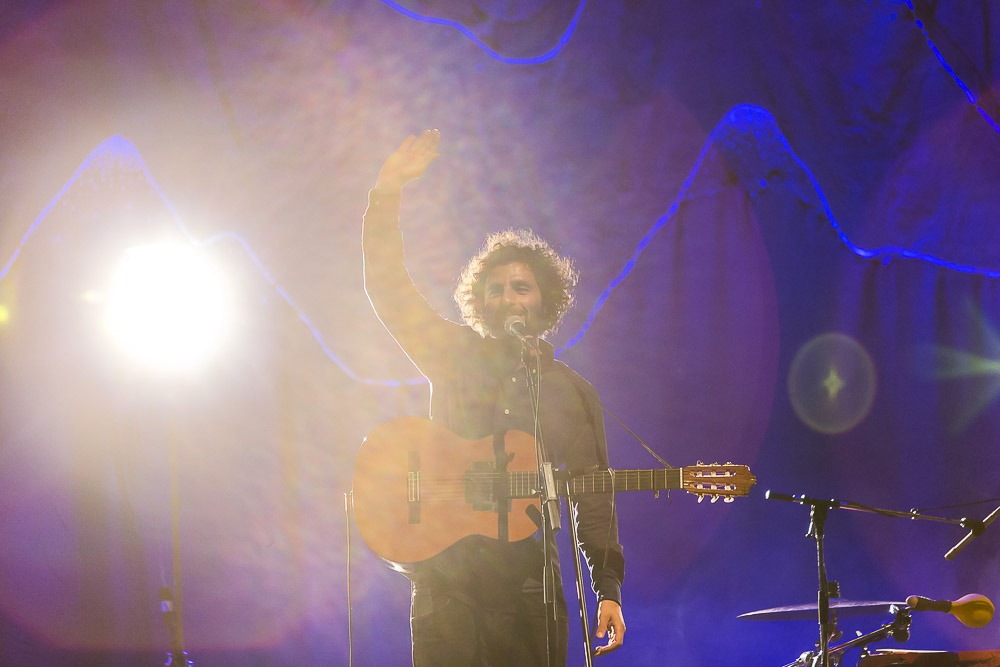 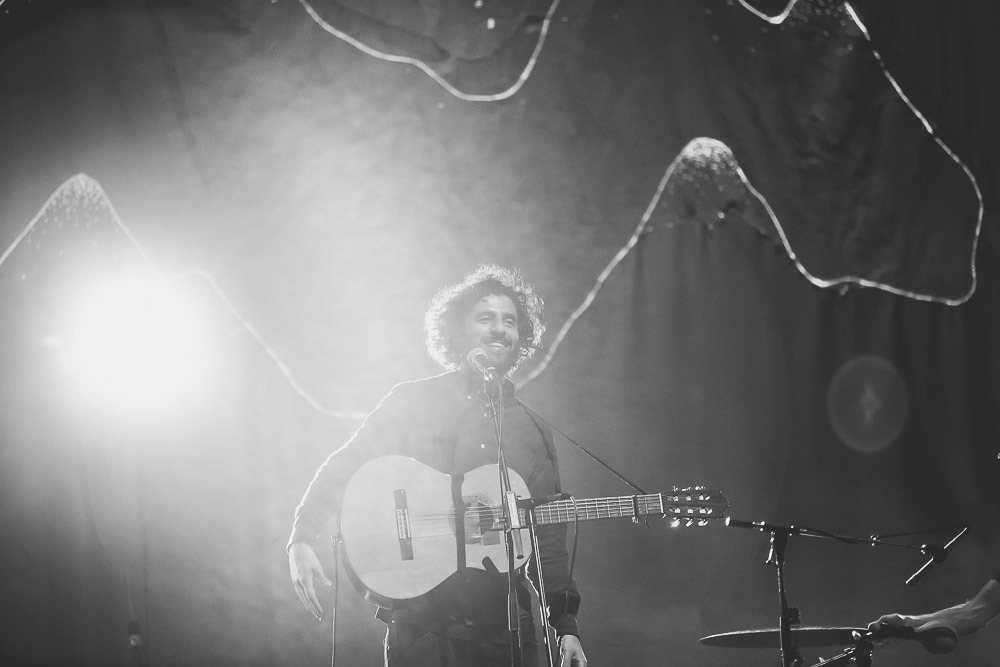 It was an incredible show and I’m so glad I had the opportunity to go! I hope I get the chance to shoot another show in the near future to see how I can improve.

A huge thanks to Katie from Mute.com for setting me up with the press pass.

Once again I can’t recommend Jose’s music enough. You can find more of his music at his website here. He has a fantastic new album out called Vestiges and Claws, and I’ve had it on repeat for the past week!