You are here: Home / Lightroom and Post Processing / Getting The Shot: Panning

Have you ever looked at a photo and wondered “How’d they get that shot?” If yes then this new series of blog posts is for you! We’ll be sharing the details behind our images to give you insight into the process taken to get the shot.

Let’s dive right in! Here’s the first image we’ll be looking at: 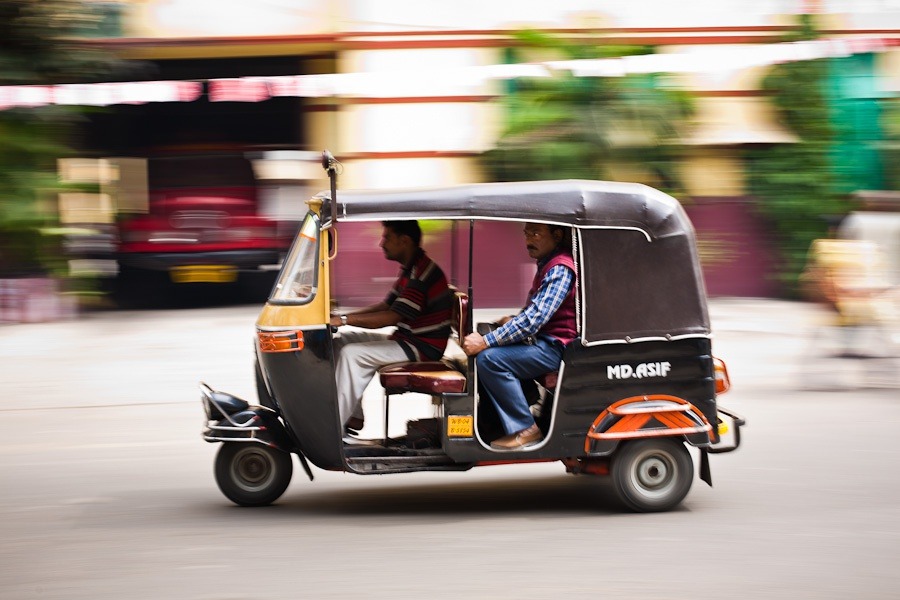 Auto-rickshaws (a 3-wheeled taxi, also known as Tuk-Tuks) are a ubiquitous form of transportation found in many parts of the world. This photo was taken on the streets of Calcutta, India. 2008.

How It Was Shot:

This photo is an example of a technique called panning, which works particularly well with moving objects like bicycles and cars. With panning you use a slow shutter speed, and follow the subject (panning the camera) as it moves past you—then you take the photo.

By using a slower shutter speed (experiment with 1/15sec to 1/60sec) your subject will remain relatively sharp while the background shows motion blur.

Panning is a technique that takes a bit of practice, so be patient. Experiment and persist!

Try using your camera’s Tv (or sometimes S) mode in order to control the shutter speed, while the camera automatically sets aperture. You can also do panning in Manual mode, if you prefer to set both the shutter speed and the aperture.

How It Was Processed: 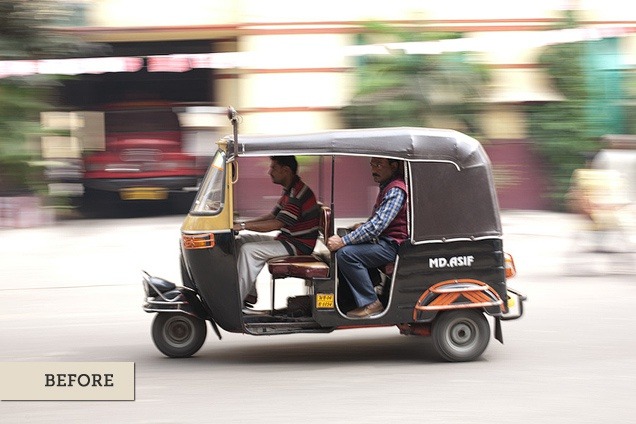 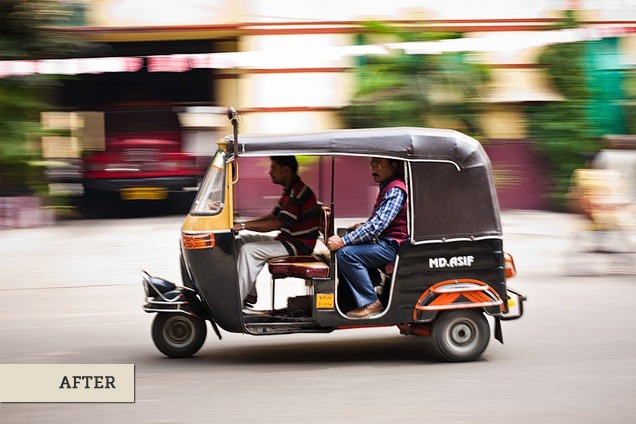 The photo was shot in RAW and processed in Lightroom.

The background of this image was fairly bright so exposure was reduced and recovery was used to bring back lost detail in the highlights.

The exposure was a bit washed out so blacks were increased in order to shift the tonal data toward the black point and achieve darker looking blacks in the image.

Since exposure was reduced the image was a bit darker so brightness was increased in order to brighten the image without losing highlight detail.

The centre of this image was much darker than the outer edges, so in order to draw the eye back to the centre a well-feathered vignette was added.

Finally I applied a bit of sharpening. It’s difficult to get panning shots tack sharp (especially when zoomed into 100%), so a little sharpening helped out.

To see a full size version of the image, click here.