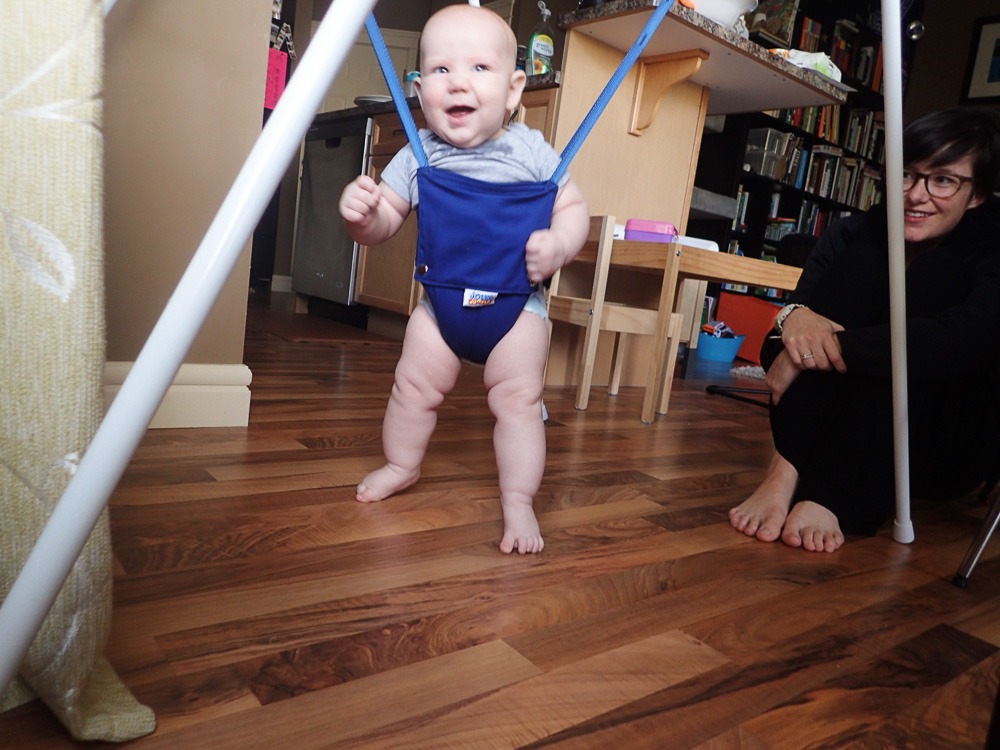 If you’ve been following this blog for a bit, you’ll know that we recently bought our (now 3 year old!) son, Max, a camera. (If you haven’t watched it yet, the video of him opening the camera is pretty adorable, from a totally biased parent perspective!).

Since getting the camera, we have been taking things slow. Max is an independent young man, and likes to do things on his own, so intense photography lectures aren’t his jam. We leave the camera on his table, easy to access whenever he wants. Some weeks he isn’t interested, other weeks he’ll pick it up a few times. We’re mostly just stoked that he is still using it – maintaing interest over months for a toddler is pretty awesome.

Recently we had a fantastic photography moment with him that we wanted to share.

His younger brother, Oliver, was having a bounce in the Jolly Jumper. Rob had grabbed a camera to get a few shots. Max, seeing this, grabbed his own camera and came and stood beside his dad to join in. He turned on the camera, got Ollie in the screen, and then…well…did nothing.

Then Ollie smiled and…Click! Max took the shot above.

Right there, the kid showed us he has already figured out timing and waiting for the moment. Without us ever saying a word about it. We were amazed. It’s so fun to see him naturally pick up concepts, and remind us just how important they are.

A Couple Other Notes:

• He discovered the video button on the camera, which I don’t think he quite understands yet. He often starts movies like they’re pictures, and never stops recording. It sounds cute, but it’s mostly just video of the camera pointed at the ceiling, or sitting on his table – complete with audio of us telling him to stop the recording. Precious. ;)

• Printing has been one thing that really gets him excited. We knew right away that we wanted to make photography tangible, so we picked up a Canon SELPHY 4×6 printer, and he asks to use it all the time. The printer itself is only ok. It’s quick to use, and Max can even put the memory card in himself. We can choose images right from the printer screen, and they print within a minute, so it’s nice and fast. But the print quality is poor, and the prints go back and forth as each color is applied, making it far too tempting for him to pull the print out before it’s ready. But seeing him run to the fridge, print in hand, to display his photo is wonderful, so we try to print often.

When we first got Max his camera, we certainly had dreams of discussing light and composition and all that good stuff with him. We quickly learned that we need to really let him take his time, and explore photography for himself. Eventually we’ll get there, but for now we’re having a lot of fun just watching him pick up that little red camera and shoot.