You are here: Home / Photography Tips / Night Sky Photography: Tips to Get You Started 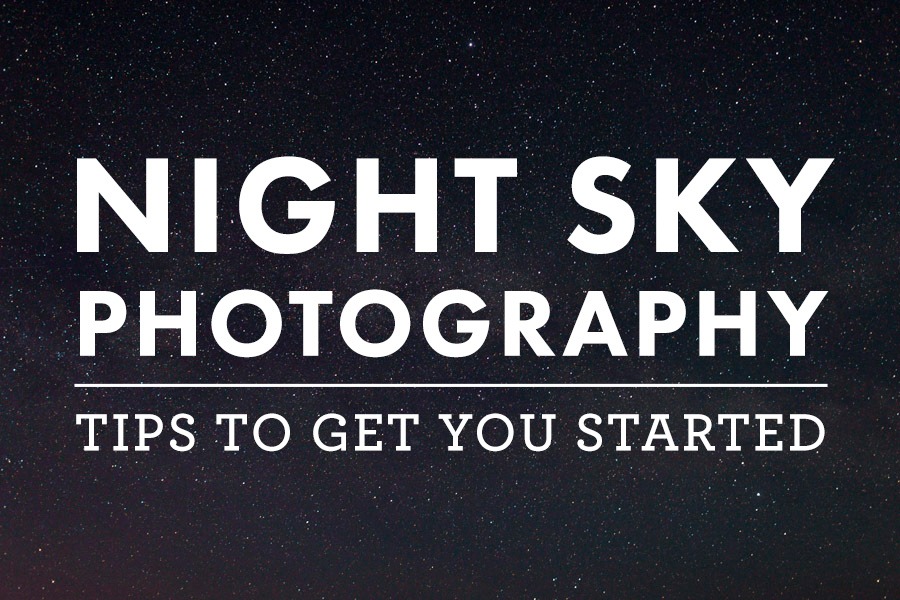 If you’ve ever pointed your camera at the night sky and taken a shot, you’ll know that there’s more to getting a good star photo than simply being in the right place at the right time. For someone new to night photography, sorting out the seemingly technical process can be overwhelming. But don’t panic! With a few simple tips, great shots of the stars are easily within your reach.

Get Your Settings Right

Even though each star in the sky is miles away from the next, because they’re all so far away from us your camera will do a good job of registering them sharply even at a relatively low aperture value, like f/2.8. A low aperture value will also allow more light into your camera, meaning you can keep your ISO a little lower and avoid getting unwanted noise (the grainy specks that show up in your photo when you use a high ISO).

Given that you’re asking your camera to register tiny pinpricks of light amidst a dark sky, a slow shutter speed is necessary. But the slower your shutter speed, the more susceptible your camera’s sensor is to registering movement, like a satellite moving across the sky and even the rotation of the Earth relative to your stars. Less than 20.0 seconds is a good bet if you want your stars to look crisp, while longer shutter speeds will make for stars that look slightly oblong due to the rotation of the Earth. Shutter speeds that are minutes long will turn stars themselves into trails of light across the sky. 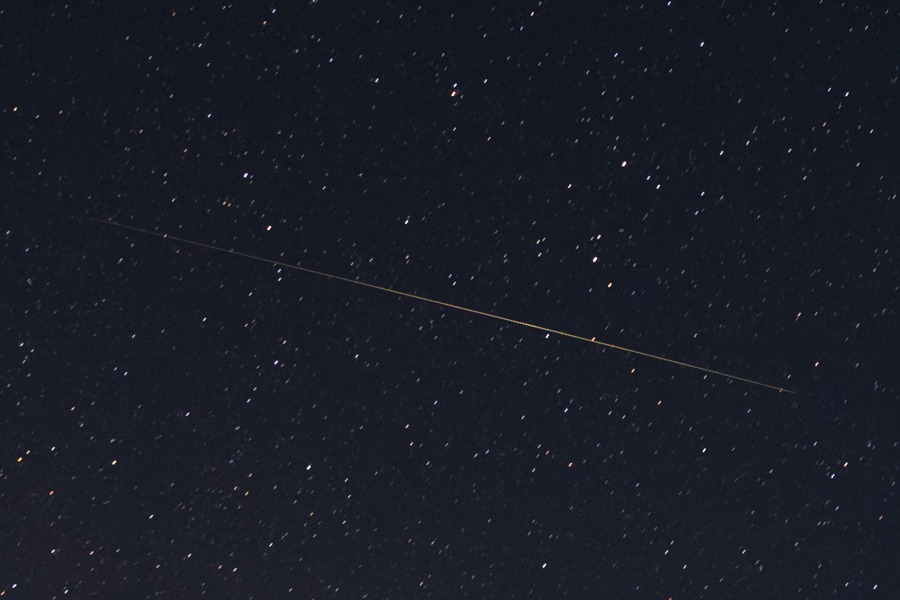 Settings: f/3.2, 20.0 sec., ISO 400. At the slow shutter speed, a satellite appears as a streak of light. This close crop of a larger shot shows that the stars are starting to look a little oblong.

While a higher ISO will let you more easily register the light of the stars, it will also increase the noise in your shot. And when you’re shooting things like the Milky Way, which registers as thousands of tiny dots of light, post-processing geared towards noise reduction can have the effect of wiping out your fainter stars. In short, do your best to adjust your aperture and your shutter speed so that you don’t have to climb too high with your ISO.

Even though you’re essentially pointing your camera at infinity, it’s best to play it safe and manually focus your shot. If your camera has a live view setting, switch to live view and zoom in on your scene so that you can make extra-fine focusing adjustments. If you’re without live view, find a particularly bright star and adjust the focus until it looks sharp.

Be prepared to play around with your settings a bit once you’re out there shooting, and don’t be afraid to experiment as you go to see whether you can achieve some interesting effects.

Because you’re using a slow shutter speed, your shots are particularly susceptible to motion blur, so staying still is key. Mount your camera on a sturdy tripod and, once you’ve chosen the scene you want to shoot, lock the camera in place. Be as still as you can when you press the shutter release. Better yet, use a wireless remote shutter release, if you’ve got one, so you don’t even have to touch the camera!

If your goal is a crisp shot of bright stars against an inky sky, keep an eye on the forecast for a night with low humidity (and no clouds, obviously!). Dryness and low humidity make for clear skies, as there’s less moisture – and thus less stuff – in the air between you and the stars.

The light of the moon is surprisingly bright, especially when your shutter speed is low. Wait for a new moon (that is, one that isn’t illuminated) or at least a crescent moon so that its light is less likely to overpower the light of the stars. That being said, if you’re just looking to practice or experiment, a bright moon can create some cool effects.

The same story goes for the sun – if it hasn’t fully set, expect to see its residual light showing up in your shots. If you want to avoid that light, start shooting well after the sun has set, when there’s no longer light on horizon.

Get Out of Town

If you’ve tried star gazing in a big city, you’ll know that the amount of ambient light – from street lights, office buildings and homes – makes it nearly impossible for your eyes to register the dim light of the stars. In such an environment, your camera will struggle too.

Save your star shots for an environment that has very little or no ambient light at night (say a campground, a field, or the yard of a cabin or house in the country). If your eyes can easily register layers upon layers of stars, your camera is likely to be more successful registering them too.

Shots of a night sky can be made extra interesting when you add something to the foreground. This not only gives extra visual interest, but helps to give perspective and anchor the viewer so they don’t feel like they’re just floating in space (although that sounds kinda fun!). A house, a line of trees, or a mountain can all add some variety to your shot. Experiment with different objects – just make sure they’re not too bright or they’ll overwhelm your pretty stars.

Be Smart and Safe

Being outside in the pitch black can honestly be a bit unsettling. But there are things you can do to help make it as safe, and fun, as possible.

Give some thought to the type of critters you’re likely to run into in the night. If you’re near the breeding grounds of some immensely dangerous nocturnal creature, you may want to stay close to your vehicle or skip the shoot altogether.

There’s safety in numbers, so consider shooting with a friend or letting someone know where you’re going and when they should expect you back.

Take the right gear. Alongside your camera and your tripod, bring spare batteries and memory cards. Pack warm clothes in case the temperature dips (don’t forget gloves to keep your fingers warm!) and bug spray.

There’s no need to stumble around in the dark the whole time you’re out and about. Bring a flashlight along to help you as you scout a shooting location and as you adjust your settings. A red filter flashlight (as in, a flashlight with a red light) won’t mess up your night vision the way a regular flashlight will, so try to get your hands on one of those! Once you’re good to go, turn the flashlight off so that the camera doesn’t pick up its light. 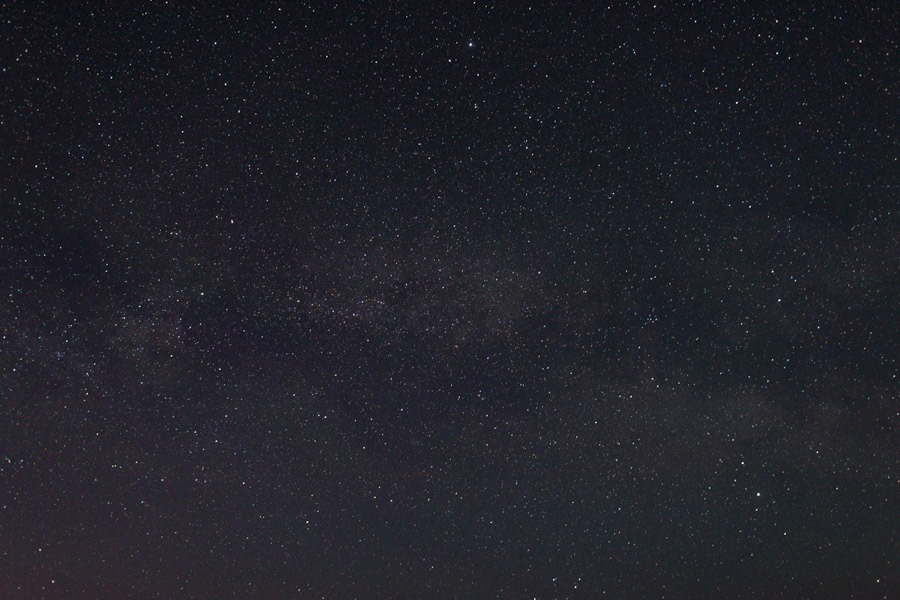 Shooting the night sky is one of those photography bucket-list kind of moments. And it’s not hard to do! Pick a great spot, wait for a beautiful night, get your settings and then enjoy capturing the universe in your camera!

Hi, I'm Stephanie! I'm a ninja-in-training here at Photography Concentrate. I've just started getting serious about shooting, and am excited to learn more. I'm interested in food and travel photography, cooking and exploring!