You are here: Home / Inspiration / The Three Worst Things That Have Happened To Me During A Photo Shoot 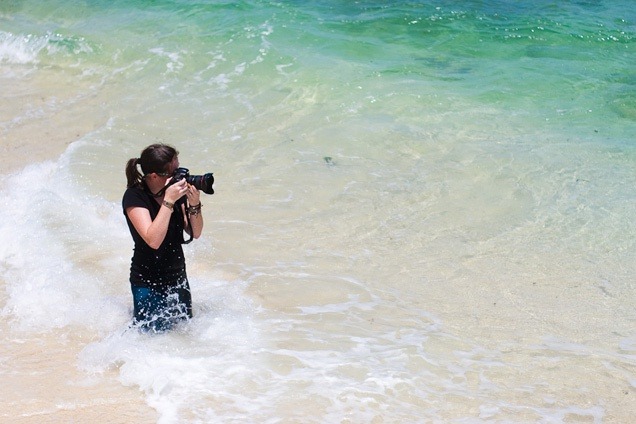 Photo sessions are a pretty crappy time for things to go wrong. It’s embarassing, and stressful, and just the thought of mishaps can give you nightmares.

But half of the battle is knowing that things will probably go wrong at some point. As weird as that sounds, if you are prepared for that eventuality, it won’t be quite as terrifying if it does happen. The other half of the solution is being as prepared as you can. With that in mind, let’s jump right in to the reason you are reading this article: hearing my embarassing stories!

We were shooting our very first destination wedding in Mexico. It was the day-after session, and we were all playing on the beach, taking some fun shots. I noticed my shutter was sounding a bit funny. A few frames later, and it just went “CLUNK” and stopped working. I tried turning it on and off, removing the lens and putting it back on, throwing in a new battery—nothing was working. I took a few moments to silently PANIC, and then walked over to our camera bag, grabbed the backup camera, and went right back to shooting. I don’t think our clients ever knew that we had a technical malfunction (until, perhaps, right now if they read this.)

Another time I had handed my camera over to Rob to hold on to as we were standing in the parking lot outside the reception venue. The details are fuzzy, but somehow he managed to drop it right onto the concrete. And my favourite lens just happened to be on the camera. I can only imagine the look he got from me at that moment—I don’t think it was a very nice one. My camera was ok, thankfully. But only because my favourite lens took the majority of the force, and was now completely broken. Time to switch to the backup lens!

So long story short, you can pretty much expect your camera gear to break at some point in your career. Chances are it will be during a shoot. You absolutely, positively must have backup gear, especially at a wedding. Even if you only shoot portraits, you’ll still want to seriously consider having some backup. It definitely won’t look good if you have to cancel in the middle of a session because your camera goes down.

The classic blunder. I was shooting in my photographer crouch position, stood up, and heard a pop. My zipper had just decided it didn’t want to stay closed any longer, and was now completely open and broken. Awesome.

This, of course, happened during the receiving line, when everyone is hanging around right after the ceremony. I awkwardly walked over to Rob, with my camera held ever so carefully to conceal the problem. He immediately hustled off to the car and grabbed my spare pair of pants out of the trunk.

That’s right—I had a spare change of clothes in the trunk for just such an emergency. It’s an absolute must for wedding photographers. That very small bit of preparation saved me a whole lot of embarassment for the rest of the day!

Yep, my kneecap once popped right out during a session!! No warning—it had never happened before. I was lying on the ground shooting, went to get up, and BAM! Kneecap is no longer where it should be! I fell back to the ground, put my hand on my knee, and, well, put it back in place. After a couple seconds of intense pain, and everyone staring at me, I said I was ok, shakily got to my feet, and kept going with the session.

Now, the lesson here is that you can get hurt during a shoot—you might get sick, or injure yourself. It’s not a fun thing to think about, but you need to be prepared. Some Gravol and Tylenol in your bag is a good start if the issue is relatively minor. If it’s a major problem though, and you’re shooting something like a wedding where you can’t just reschedule, you need to have a backup plan in place. This usually consists of having the phone numbers of local photographers in a file, so you can call around to find a last minute replacement in an emergency.

So, the big takeaway from these lovely stories is that the more you can be prepared for possible problems, the easier it will be to bounce back, and keep on taking amazing photos!

Have you had anything crazy happen to you during a shoot? How did you handle it? Share with us in the comments now!