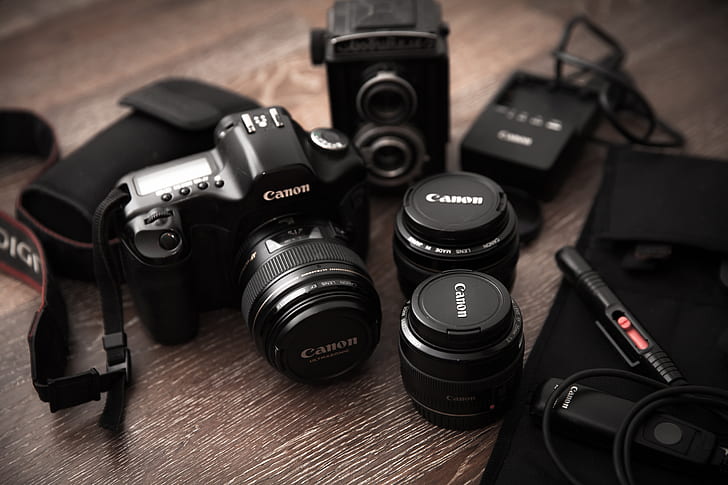 Introduced in 1987, Canon’s Electro-optical System (EOS) has become one of the most popular DSLR camera series—and for good reason. It offers fantastic cameras for novices and professionals alike. What exactly makes the Canon EOS series stand out from its competitors, though?

One of its most outstanding features of the EOS series is the introduction of eye-controlled focusing. Namely, the camera tracks eyeball movements and accordingly focuses on the spot you’re looking at through the viewfinder. This technology is extremely valuable in sports and wildlife photography, where the subject changes position quite rapidly.

The Canon 70D and Canon 80D are some of the best-selling DSLR cameras of the Canon EOS series. In this article, we compare the Canon 80D vs. 70D, so you can have an easy time determining which one is best for you.

The 70D provides better battery life at a better price. However, the 80D offers more features and superior performance.

The Canon 70D is one of Canon’s most budget-friendly full-performance DSLRs. It is a well-rounded camera designed for the photography enthusiast. Besides having all the features you would need in a DSLR, it is well-built and is comfortable to hold.

One of the outstanding features of the 70D is the dual-pixel CMOS AF technology, which promises a dramatic jump in autofocusing in movie mode. This camera also features a fully-articulatable ClearView II LCD touchscreen that allows you to control all the camera’s features by just tapping your finger.

Moreover, the 70D comes with a 7fps continuous shooting speed, which is significantly faster compared to its predecessors like the Canon 60D, which offers 5.3 fps. However, the speed may not be sufficient if you’re into shooting sports or high-speed action photography.

Also worth mentioning is that the 70D comes with built-in Wi-Fi, which allows you to share your picture via a Wi-Fi network to your smart devices and other compatible media devices. Likewise, you can transfer files to your computer, thanks to the optional EOS software. The camera also has a remote shooting feature, which allows you to capture time-lapse images over a prolonged period of time.

Overall, the Canon 70D is an exceptionally well-rounded camera for beginning to intermediate photographers. It has all the features you would expect in a DSLR in its price range. While it isn’t the newest DSLR around and has been discontinued by Canon, it is worth considering before shelling out a much larger sum of money. 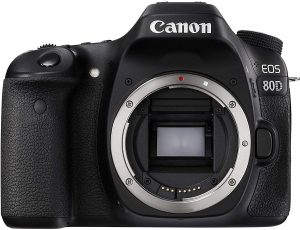 Introduced to the market in 2016, the Canon 80D came to replace the 70D. It is an excellent DSLR, offering you a variety of advanced features. It will be an ideal option if you’re looking to upgrade from an entry-level DSLR.

Being the successor to the Canon 70D, the 80D comes with a better sensor and more advanced autofocus capabilities. Namely, it is equipped with a 24MP sensor with improved ISO sensitivity. That translates into excellent, highly detailed pictures.

This camera also boasts a 45-point autofocus system, which makes it a superb choice if you’re looking for a wider autofocus coverage and a greater ability to follow moving objects.

This feature makes the 80D perfect for a variety of shooting situations, including general use, traveling, portraits, and fast-paced actions like wildlife and sports photography. Video is another strength of the 80D. It delivers high-quality video footage with plenty of features for both novices and filmmakers. The only setback is that its lacks some notable features like 4K.

All in all, the Canon 80D is a solid, well-built, well-rounded DSLR. The controls are sensibly arranged. It has awesome ergonomics and a vast feature set. The image quality is excellent with plenty of detail, particularly at the lower sensitivity settings. It is certainly a worthwhile upgrade of the Canon 70D.

Launched in July 2013 and February 2016, respectively, the Canon EOS 70D and Canon EOS 80D are two much-lauded cameras that come equipped with an APS-C sensor, but which one should you buy, and what’s the difference between the two?

Since its introduction, the 70D has remained an excellent mid-range DSLR. The 80D, on the other hand, has adopted everything great about the 70D and improved on it. It delivers superior performance when it comes to continuous shooting, video capture, and low-light photography.

The 80D also produces higher-resolution pictures. However, the ultimate choice would depend on your specific needs. If you want to upgrade to mid-range DSLR without breaking a bank, then the 70D would be a great option.

The 70D is a bit cheaper compared to the 80D. While it’s somewhat inferior in performance, it makes an ideal choice for the enthusiastic amateur looking to upgrade from a compact camera. The 80D, on the other hand, would be a perfect choice if you are looking for a mid-range DSLR camera that excels at video capture.

If you already have some experience in photography, the 80D will help you sharpen your skills. If you’re into sports or wildlife photography, you’d be better off with the 80D as it offers a faster rate of continuous shooting compared to the 70D. Overall, if your budget allows for it, the 80D is the better all-around choice.

Having a Digital Single Lens Reflex (DSLR) camera is essential if you’re looking to advance your photography. These cameras are equipped with a mirror on the inside, which reflects the light coming from the lens into the optical viewfinder.

There are several things that make DSLR cameras superior to other camera types like smartphone cameras and smaller point-and-shoot cameras.

First, DSLRs are much bigger and can accommodate larger sensors inside. With large sensors, they deliver better image quality and better performance in poorly lit environments.

Another outstanding feature of DSLRs is the autofocus system. The autofocus technology of these cameras is not only faster but also delivers superior continuous performance and subject tracking. When shooting athletic events or wildlife, this is pivotal.

Moreover, DSLRs allow you to attach different lenses to suit different subjects and scenes. There’s a wide variety of lenses to choose from depending on your photography needs, including:

Each DSLR camera brand has its own proprietary mounting system and accompanying lenses. However, there are also third-party lens manufacturers, which generally offer their lenses in different types of mounts to suit different photography needs.

Another remarkable attribute of DSLRs is that they have exceptional battery life. On a single charge of its LP-E6 battery, the Canon 70D can deliver up to 920 shots, whereas the 80D can get about 960 shots with its LP-E6N power pack.

Founded in 1937, Canon is a world-renowned company whose headquarters are located in Ota, Tokyo, Japan. The company is involved in manufacturing a vast range of electronic products.

It also manufactures a wide selection of DSLR cameras, which are built using premium quality components. In fact, Canon has manufactured and distributed digital cameras since 1984. Its first digital camera was the RC-701. The RC series was followed by the Powershot series and the Digital IXUS series.

The brand is also known for the EOS series of DSLR cameras, which encompass high-end professional models. While the EOS series dates back to many years ago, some cameras of that series still have a huge demand across the globe. These cameras are especially popular among professional photographers because they deliver optimum performance.

Besides being designed and built by some of the most refined professionals in the industry, these Canon DSLRs are equipped with a state-of-the-art lens that provides superior quality images. Moreover, you can easily attach a number of lenses to these cameras.

You can also capture images and videos from different angles. Other remarkable and valuable features of this brand’s cameras are the white balance systems. These systems further ensure image quality as you can take pictures according to the prevailing lighting conditions.

Whether you are a novice, intermediate, or professional photographer, Canon will always have a product that suits your needs and budget.

To get a detailed understanding of both the Canon 70D and Canon 80D, and know-how they differ from each other, let’s look at their key specifications side by side.

See why you should care about shooting in raw vs jpeg.

Let’s take a detailed look at some of these features:

The 80D and the 70D have a virtually identical body design. Both are built with polycarbonate and magnesium alloy. The only difference is the button layout and the fact that the 80D has a headphone port.

Both the 80D and the 70D come equipped with a crop-frame APS-C sensor. However, the 80D’s sensor is somewhat more advanced, with a 24-megapixel resolution versus the 70D’s 20.2 megapixels.

Both cameras are equipped with dual pixel autofocus. This makes them an excellent option for video making. They are swift and exceptionally accurate to focus. They’ll give you an easy time tracking a moving subject.

The DiGIC 6 process in the 80D is superior to the 70D’s DIGIC 5+ processor. That means the 80D can process images much faster once you capture them.

Canon 80D has a greater ISO range; 100-16000 vs. the 100-12800 of Canon 70D. Furthermore, the 80D makes minimal noise all through its ISOs, thanks to the ISO variance feature that it is equipped with. This feature leads to reduced noise when shooting and when regulating light settings after shooting.

Both the 70D and 80D can capture continuous pictures at seven frames per second (7fps). However, the 70D can take just about 20 continuous JPEG format shots before it lags out, compared to the 80D’s over 100 shots, thanks to the more advanced processor. This difference is significant in fast-paced actions, such as in wildlife or sports photography.

The Canon 80D and the Canon 70D are two high-end DSLRs that are ideal for serious photographers. While they have a lot in common, each model has a few features that set it apart from the other. It is the differences that will help you determine which device you should purchase. If you consider the battery life, for example, the 70D will give you 920 shots on a single charge while the 80D delivers about 960 shots.

Overall, the 80D is superior to the 70D. It would be a great choice if you’re looking to upgrade from an entry-level Canon DSLR.