You are here: Home / Cameras / Sony HX80 vs. Sony HX90 Digital Compact Cameras | Which One Is the Best for Beginners & Professionals? 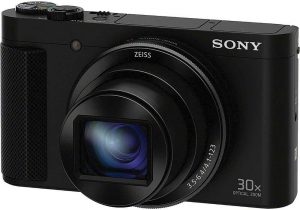 Some cameras are just hard to operate and end up frustrating you no end. Blurry images aren’t fun, especially when you’re trying to capture the precious moments in life.

However, cameras have evolved over time. From the massive, black and white, manual, and often blurry cameras of the 20th century, we now have sleek, lightweight, and affordable digital cameras fit for the digital age.

Sony has been a market leader for many years producing high-end, affordable electronics and imaging products. We set out on a quest to find two sophisticated cameras from this brand that were relatively affordable and featured high-end specs.

Although the primary purpose of a camera is to take photos and film videos, the Sony HX digital camera series have something extra. When comparing the Sony HX80 vs Sony HX90, you’ll find that they both have 30× optical zoom and Pop-up EVF, and both weigh less than 8lbs. The perfect modern accessory!

After carrying out in-depth research, we have broken down the features to look for in digital cameras, followed by a comprehensive comparison between Sony HX80 vs Sony HX90 cameras to help you zero in on the best one for you. 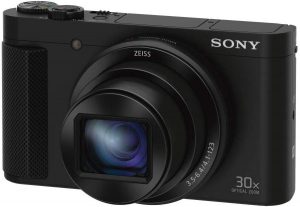 The Sony HX80 compact high-zoom camera is the only one with a retractable, built-in electronic viewfinder. The HX80 is very similar to the Sony HX90 in appearance. However, Sony HX80 lacks the control ring around the lens.

A unique feature with the Sony HX80 is a large number of exposure modes. These include Super Auto, Program Auto, Intelligent Auto, Shutter Speed Priority, Memory Recall, and Aperture Priority. Other additional styles include the panorama and scene selection shooting modes.

This digital camera uses an NP-BX1 battery. You can charge it using the Multi Micro USB 2.0 cable. In still images, the camera is rated at 390, while on pop-up EVF it goes to 360. The camera supports MS Duo, MS PRO Duo, SDXC, SD, and SDHC memory cards. It also has inbuilt Wi-Fi and NFC.

The HX80 is an excellent camera for travel photographers, outdoor enthusiasts, and anyone interested in photography on a budget. It has an expandable ISO, selfie-friendly LCD, decent battery life, and is very affordable. The lack of manual controls and GPS location tracking are the only significant disadvantages.

Check the Price of the Sony HX80 on Amazon

The Sony HX90 is a compact digital camera with a 30× zoom. It uses a tilting screen and electronic viewfinder to allow you to take photos even in bright light. This camera also a control ring around the lens and secondary manual dial on the rear to help in adjusting the focus.

HX90V has a native ISO range of 80 – 12800, but unfortunately, it does not support images in the RAW image format.

Sony HX90V is not the highest resolution Small Sensor camera, but it is one of the best. It has high connectivity with built-in Wi-Fi and remote smart devices compatibility. The GPS feature helps you track your location.

The HX90 is the perfect camera for nomad photographers. The manual control, built-in Wi-Fi, and electronic viewfinder features make photography much more exciting. The only downside feature of the camera is that it does not come with a memory card.

Key Features to Look for in a Digital Camera

Always look for a camera that does not cost a fortune. The ones that do can be very expensive to repair if they break down. However, you should also avoid that ridiculously cheap camera that will end up costing more to repair and replace than the initial purchase price. Photography and electronic experts recommend a comparison of several cameras based on price before purchasing them.

Photography without a few manual controls is boring and could be counterproductive for students, who would like to up their skills. They’ll need to twist to learn zoom, how to control shutter speeds or exposure. Manual controls also enable you to get the best angle before clicking the shutter button. Always settle for a camera that has some manual controls for a better experience.

Zoom lenses are the heartbeat of a camera, without which the camera would virtually be dead. A 30× zoom lens gives the camera an extraordinary feel, and this means the camera can take clear photos even when objects are in motion.

The battery life of a camera is vital to its usability and functionality. As a photographer, you might need to spend a lot of time in the field. Always opt for a camera that can take as many shots as possible on a single charge.

Outdoor photography requires portability. No one wants to lug about an expensive and large camera that could get damaged or stolen in an instant. Always consider weight and portability when looking for your camera.

There are several similarities between the HX80 and HX90. These include:

Although the two models are very similar, we cannot fail to highlight the differences between the Sony HX80 vs Sony HX90. The modifications include:

At A Glance – Key Features

Check the Price of the Sony HX80 on Amazon

Founded in 1946, Sony has proven its worth as a manufacturer of top-drawer cameras. All their cameras are durable and of excellent quality and features. Their inventory varies widely in terms of product variety and price. Every few years they launch new innovative products that incorporate the latest technologies.

But this long history has not been without trouble. Sony once recalled 700,000 video cameras because of a flaw that enabled cameras to see through people’s clothes. The cameras were designed for night use, and for that reason, were equipped with infra-red technology. However, if used during the day, the camera’s infra-red lens could see through clothes, leading to a major controversy.

The similarities between the Sony HX80 vs Sony HX90 make it hard to pick a clear winner, but from our careful comparison we made the following observations.

Sony HX80 comes with a memory card and expandable ISO. However, a good camera should be able to zoom in on an object from a long distance, and the HX90 can do this better than the HX80.

The HX90 also uses manual control, which the HX80 completely lacks. This feature means that the photographer has control over the angles when taking photos or videos.

Both cameras have high-quality lenses and have a $100 difference between them. In our opinion, we have gone with the Sony HX90 for its added GPS features, lighter weight, and superior optical zoom capabilities, despite the slightly higher price.

Let us about any of your own experiences with either of these cameras, should you decide to give it a go!